Well not much has been happening on the crafting front so I thought I’d post a couple of interesting pictures of some rain clouds, pathetic yes? However it has been a while since I last posted so I need to come up with something.

I was up early, miracles of miracles, and happened to glance out the sliding porch door and noticed some billowing puffs of “I can reach out and touch them” clouds right over my deck so I rushed for the camera and took a few shots.

Rain cloud above back deck.

Not that I’m paranoid or anythng but what is that circular formation in the middle?

I thought the middle of clouds were interesting because I was thinking…hmmm…early formation of funnel? There wasn’t any indication of the winds rotating around this hole so I didn’t think much of it. Anyhow I rushed out the front to snap a shot and laughed because my neighbour from across the street had the same idea and had rushed out with her camera as well. She’d been out walking the dog and rushed home to grab a few shots.

Anyhow she pointed out that the clouds were moving quite quickly and although it didn’t seem like it when I was standing on the back deck I could see she was right because the formation had already moved off. I was just in the right place at the right time. I rushed into the house and back out onto the deck and by that time the sun was just breaking through the clouds. 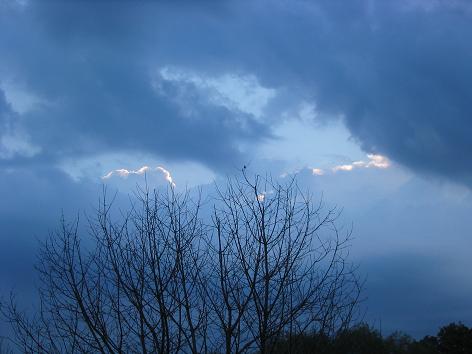 This entry was posted in Life and tagged clouds, Life. Bookmark the permalink.