It’s been a while since the last post sorry but I haven’t really had my mind on anything other than trying to get the house into shipshape for the bridal shower (this Saturday) and getting things done for the wedding in September.

I do have something to post though, some bathroom curtains I finally got done last night. The old ones were really ratty and I threw them out when I cleaned the bathroom for my brother’s visit in July. The new ones were made with some hand-dyed material to match the shower curtain. 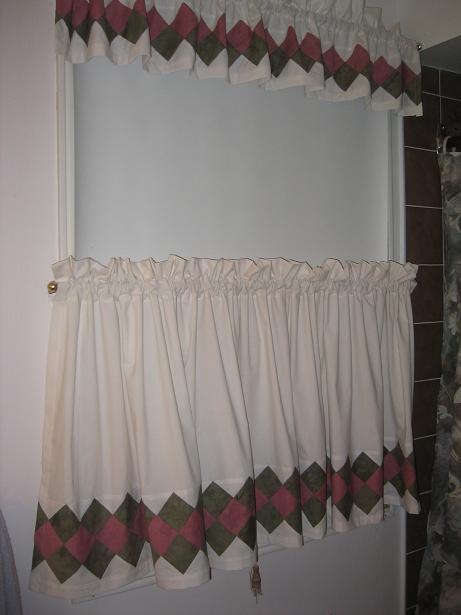 It took me a bit to work out the dimensions for the valence and sew the seams. Of course I sewed the wrong seams first and made the pocket to small for the curtain rod so it didn’t fit and that had to be ripped out but once I had done the upper curtain the bottom curtain whizzed along just fine. It kind of tickles my fancy that I now have the knowledge to take any colour in the house and make accessories that match.

I did some cleaning yesterday as well so things are slowly moving along, who knows maybe I’ll even get a decent amount of cleaning done before Saturday. On a different note, we now have a new record for rainfall during the summer in Toronto and greater area with rain falling at some point/place each day of the past two months and yes it looks like rain again today. Last few years have been drought conditions though and the Great Lakes had fallen several feet so this rain is needed. The days haven’t been to bad with lots of patches of sunshine inbetween the rain so I can’t complain. My daughter had her basement flood a couple of days ago with a heavy rainfall. One of the town’s pumps failed and the sewers backed up. Unfortunately they had just spent a lot of money, time and effort re-doing the basement to code so they could rent it out so I don’t know what this will set them back although their insurance should cover it, such is life.