A few more picture of some snow dyes. The first set is an experiment I did with some left-over scraps. It didn’t work out very well because the pieces of material were so small I couldn’t really tell whether or not the snow made an effect on the dyeing.

Starting to layer the snow and material

Flipping jar upside down in sink. 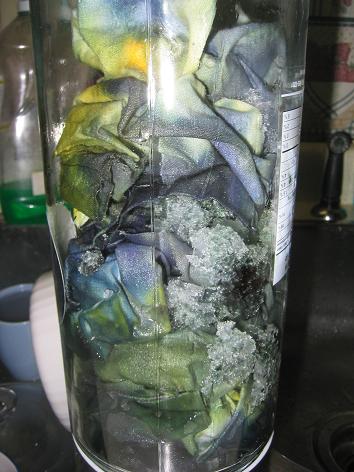 The samples turned out quite light and some of the fabric was from Walmart and didn’t take the dye as nicely as the P&B. The darker pieces were those on the bottom of the jar where the dye pooled.

I did another piece of P&B yesterday using up the left-over Navy Blue from Dharma. I did this in the bathtub on a large lid so I spread out the fabric as well as I could instead of scrunching it. I figured that there would be more globs to it but instead it ended up with more creases. I can’t really explain it because unless you’ve compared a piece of snow-dye to parfait container fabric you won’t know what I mean. Let’s just say it didn’t turn out how I envisioned but part of that could be that the dye pooled on the large lid rather than running off. The piece looked dark so I didn’t batch it that long, about eight hours. As it turns out it dried lighter than expected and did have a bit of a purple cast but not much. 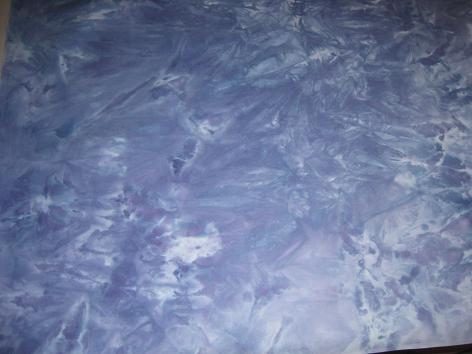 Lastly here is a picture of the granny squares that I have finished so far. I needed to spread them out to get an idea of how big the afghan would be. It’s about 11 rows by 12 rows. I’m not sure whether or not to make it square or to make it slightly rectangular. 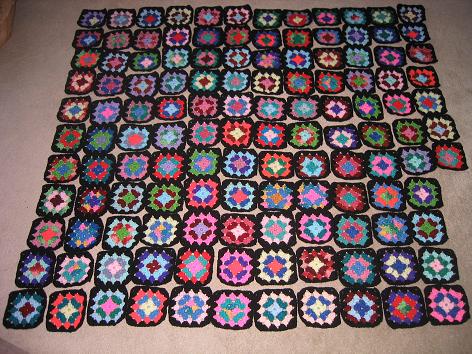 This entry was posted in Crochet, fabric dyeing. Bookmark the permalink.