Well after spending about 7 hours yesterday on this blanket (and I do not exaggerate) crocheting the squares together I finally finished it. It was a long haul and I don’t want to see another for a long, long time. An uncharitable feeling I know given that the blanket is supposed to be made with love and care for the one it’s going to but given that it was dumped on me (can’t think of a better description) at a time when I’m snowballed under with projects I was somewhat resentful, which I guess explains why I’m human and God is God. 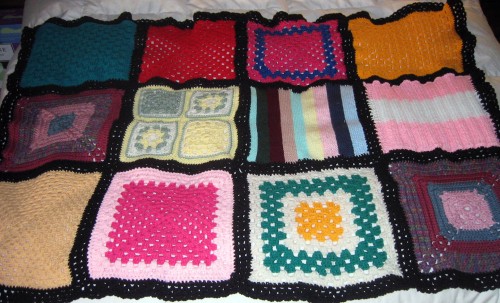 This looks good, you may not think so but given what I had to work with it turned out really well if I do say so myself. The squares were all contributed by ladies of our group and were “supposed” to be 12″x12″, needless to say they were not and a lot of them weren’t even square so the challenge was how to join the squares together and make them look good and to tell the truth they didn’t even look good colour-wise sitting on the bed. I should have taken a before picture but I’m always forgetting the before pictures.

Once again I turned to one of my favourite bloggers “Thornberry” and in one of her posts were these two links:
Heartmade Blessings comfortghans

In her post Thornberry posted a picture of a flat-braid method that she had used to join some crocheted squares together. Imagine my surprise when I went to the first web page and found out that this method is being used by a lady in another blessings group to join donated squares into blankets. I’m wondering which of the people I complained to prayed for me, lol.

I had been given a large ball of navy (that’s all we had in the bin) but ended up using some black that I had on hand at home. I think the navy would have looked good but the black helps to perk up the colours. I needed two balls of the yarn. I used up one ball and then part of a second; each ball was 7 oz so I probably used 8-9 oz of yarn total in joining the squares.

Edited to add: I dropped off the blanket today and the ladies were thrilled. It was agreed that joining the squares were a major chore and hassle so now I’m feeling better that it’s just not me that feels this way. LOL, I was feeling uncharitable because it’s supposed to be a blessing blanket but I’m muttering under my breath the whole way.

This entry was posted in Crochet and tagged Blessings blanket. Bookmark the permalink.