I finally got around to finishing up the “Cottage Tote” bag I started the end of January and I’m quite pleased with the way it turned out. The only big snag was self-inflicted at about 11:00 p.m. when I put the zipper in wrong side to right side, lol, I decided to make it a night at that point.

“Cottage tote” from the book “Quilted Bags and Totes” by Denise Clason. 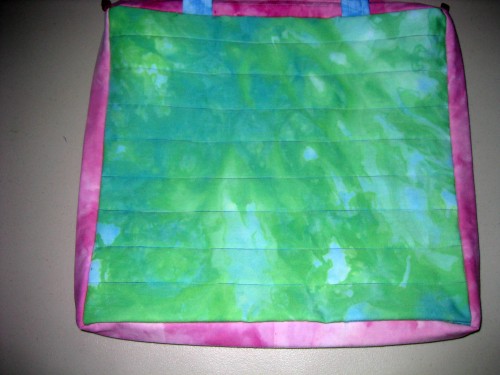 Back of bag using hand-dyed fabric received from my secret sister swap. The blue, yellow and green on the front of the tote was also from this swap. The pink and light blue was from my own stash.

Inside of the bag. The fabric is a snow-dyed piece I recently did. 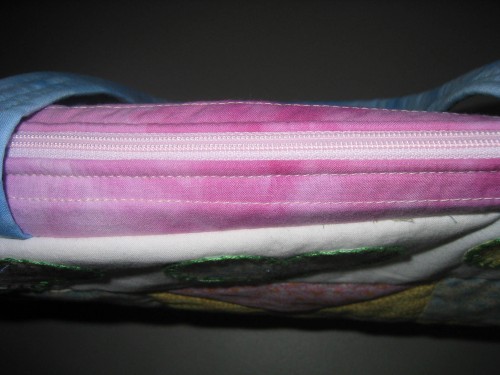 The bag is going to a lady I know at church. Her favorite colours are yellow and blue. She’s a musician, songwriter and author so every time I see her she’s got an armload of papers/music sheets so hopefully this will help. The bag is quite roomy.

We had warmer temperatures the last few days and rain so I dashed outside wanting to do a couple of pieces of snowdye before it melted. One of my forum friends had sent me some coral to experiment with and the idea was to try and make some clouds with a hint of coral. Well long story short I forgot to do the big blotch pattern on the first piece and I used the wrong blue. I used cerulean blue and probably should have gone with the mixing blue.

Cerulean blue and Coral in a plaid configuration. The snow was from underneath and granular. 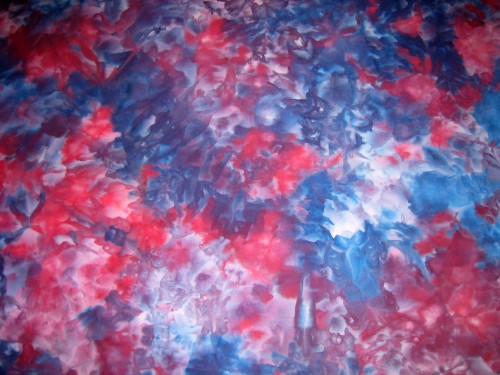 Cerulean blue and Coral, bit of a purple cast to it.

So I thought that I’d try again only this time use less of a concentration of the coral and then do the pattern in bigger blobs. Lately I’ve been working with lavender mist so I thought that would do nicely as well. It was raining outside when I got the snow this time. 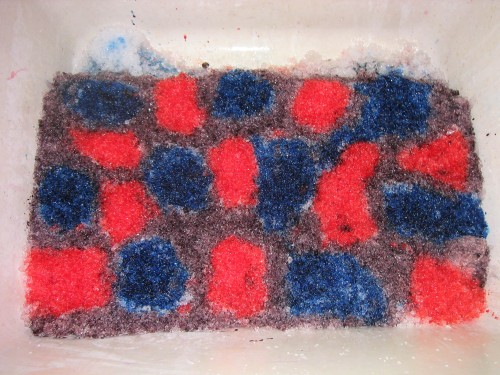 Globs of cerulean blue and coral with lavender mist in between.

The first piece had more of a purple cast to it which was surprising given that I used the lavender mist in the second piece but I figure it had more to do with the coral being stronger and the pattern layout. The blue and coral had a better chance of interacting. The blotches of colour were smaller in this piece.

Nice pieces, I used half the strength of coral dye in the second piece but it doesn’t really look like I did. No big fluffy clouds this time around, more like peonies in blue. Might be interesting to try again but have the flowers in a bed of green.

This entry was posted in Crafts, fabric dyeing, sewing. Bookmark the permalink.