I’ve been away to two different cottages this past month and a good time was had by all. We went to our friend’s cottage up in the Parry Sound area – about a 30/40 minute ride by boat from the Parry Sound harbour. Lovely cottage and a fabulous way to spent a holiday during one of the hottest weeks of the summer. Here are a couple of pictures of the grands. 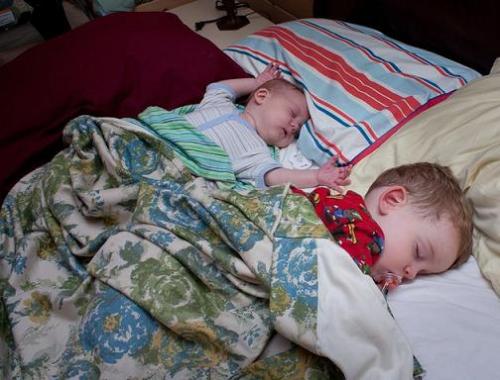 Little angels asleep in bed having a nap, grandma’s boys.

Grandma’s girl playing with her toys.

In the water with grandma having a great time. The hats kept off the deer and horse flies.

Next we went up to John’s sister and brother-in-law’s cottage to help celebrate their 40th wedding anniversary. A great time, tons of food and lots of visiting of relatives. I don’t have any pictures but I do have a picture of a small table topper I made as a gift.

Table topper made with designer “Kansas Troubles” -Winter- line of fabrics. The pattern idea was courtesy of a tutorial put out by the Missouris Quilt company and Jenny. I’d made the whack and stack quilt from another tutorial and had these left-over trianges so used them to make the table topper. Most of the fabrics are from the designer line with the exception of a few beige triangles and the borders.

I have another project that I’m currently working on. I made this quilt using the pattern “Bars of Gold” from Pam & Nicky Lintott’s book “Jelly Roll Quilts”.

One of the common names for the pattern is chinese coins. I used a roll of Philip Jacob’s florals and then the purple broadcloth for the rows in between. The borders were slightly larger than what was called for in the book. I could have used a different colour than the purple but it really did set the fabrics off better. Philip Jacob puts out material that is very like Kaffe in that he has some very vivid colours.

One response to “Cottage time and quilts.”