Well I finally saved up enough of my craft allowance so sent away for a new spinning wheel, extra bobbins and a drum carder. There is a company over in Holland called Woolmakers who have released a spinning wheel called the Bliss and a drum carder called Hero. I found out about the company through a post by a fellow Ravelry member who’d bought one. The wheel had some pretty good reviews from the people who tried it and the price is very good so I ordered one. The package arrived last Friday.

You can tell I’m excited.

I decided to open the Hero first because I had a hankering to play with it before trying the wheel. The Hero comes assembled except for the handle, which needs to be screwed into the body of the main drum. After trying to screw in the handle I passed it off to my husband to try, no luck, argh! Closer inspection with a flashlight showed that the first couple of threads on the bolt in the drum didn’t have a well defined groove in them, this sometimes happens. It’s possible if we tried really hard we might have gotten the handle in but we didn’t want to take a chance on ruining the screw in the handle. I decided it’d be better to contact the company before trying anything else.

I wrote to the company to explain my dilemma. While waiting for a reply I discovered a very simple solution to the bolt/thread problem – they have tools to fix stripped bolts. Aha, my son-in-law has a machine shop I thought maybe he has the tool. Meanwhile the company had gotten back to me about the problem with the Hero and I said I’d be willing to try and fix it myself with replacement parts (they had offered to replace the entire Hero). I took the Hero over to his shop and I kid you not when I say it took him all of one minute to fix the bolt and attach the handle for me. I was so grateful I looked at him and told him he was my hero. It wasn’t until I got home I realized I’d called him a hero and he’d fixed the Hero for me 🙂

The company was so quick to send out the replacement parts I didn’t have a chance to tell them not to bother. Any company can have something go wrong with their product, it’s how the company responds to me the customer that impresses me and I have to admit that I was impressed by their service. I also want to mention that the order for my stuff went in on a Monday night and was shipped on Tuesday and arrived at my door on Friday the same week. This was overseas from Holland to Canada, I was stunned that the parcel arrived so fast. I was also happy that I didn’t have to pay any duty or taxes and the shipping was included in the price of my stuff.

The Hero is a small drum carder with a four inch width and the length of the batts can go up to 32.5 inches. I found out the length of the batt depends on the fibre you use. The first wool fibre I carded was some stuff I’d bought on holiday out in Vancouver. It was dense and matted. I’m not sure if the wool was to be used for felting or for spinning. Anyhow the Hero did a great job on fluffing up the fibre into batts but the resulting batts are springy so they came off the drum and shrunk a bit. I’m not that familar with spinning and wool but I almost want to say garbage in = garbage out but it’s possible this stuff would spin up into some nice woolen yarn. If only I knew how to spin woolen. 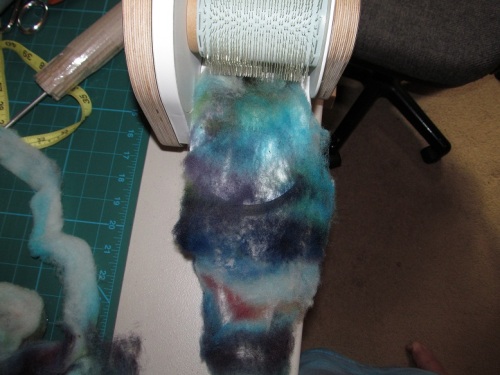 Feeding roving into the Hero. 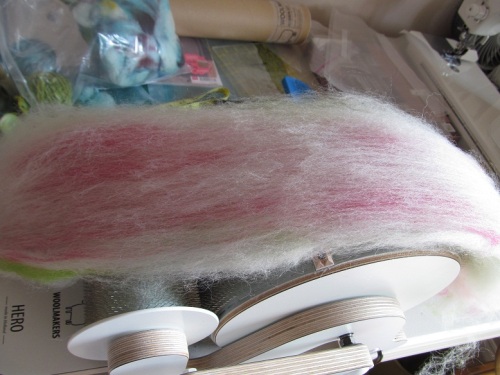 Pink side of batt. 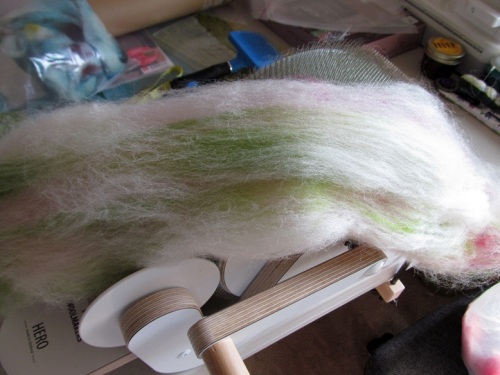 I don’t have much drum carding experience but I can say I’m pleased so far with the results. I think if I was into serious spinning and production of my own carded wool then I’d most likely want a bigger width in a carder but seeing as how I’m just want to produce batts for my own personal use I think this carder is fine for me and the price is right for sure. I haven’t tried making any art batts simply because I don’t have the various fibres to try that out but I’ve read other blogs and the owners say the Hero works fine for them as well.

This entry was posted in Spinning and tagged Hero drum carder. Bookmark the permalink.