Saturday saw my treasure of a husband driving me into Toronto to the 2015 Toronto Knitter’s Frolic so that I could make a mad dash to the Wellington Fibres Mill booth. I’d bought some of their mohair/wool fibre last October at the Woodstock show and spun it up and knit a beautiful shawl with the yarn I’d made so this was my excuse for getting yet more fibre. I mean it’s not like I don’t have a full closet full of the stuff but you can never have enough even if it’s only to take the stuff out and fondle it every now and then.

So all of the roving came from Wellington Fibre Mills. I admit I haven’t a clue what is in the rovings because I bought five boxes of “Mystery” fibre at $20 a pop for 250 grams. I do know that it has mohair and wool and probably some alpaca but I’m not entirely sure. As the booth helper explained it could even have dog in it, dog? Anyhow this time around I bought two boxes each of the two colours and one box of the red. Seeing as how I ran short when making the shawl I didn’t want to do the same for the next project I knit. 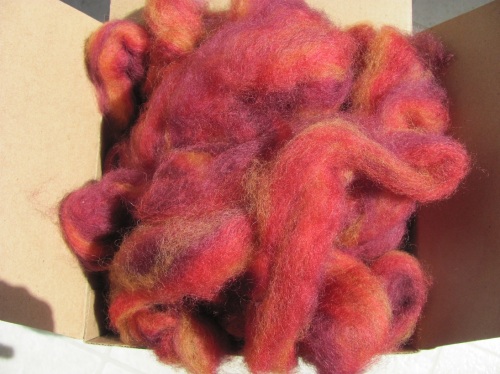 I also snagged a couple of boxes of kid mohair. I’m not quite sure how I’ll use these but they were too pretty to pass up. 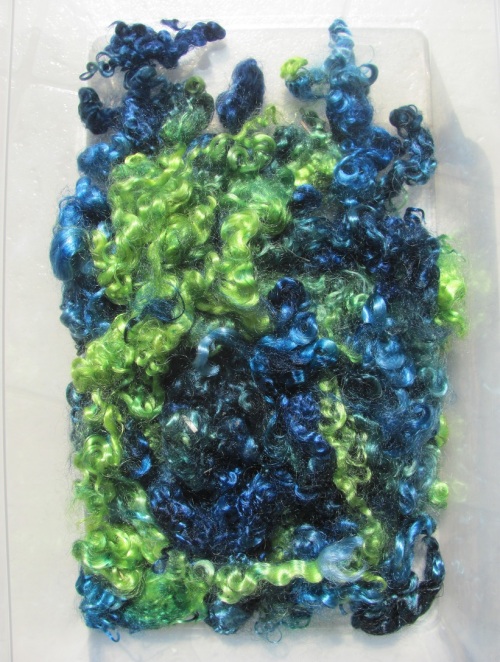 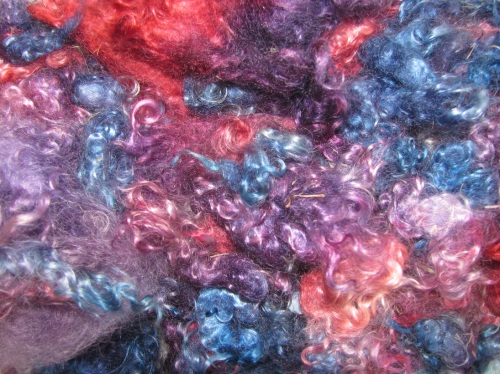 Next I visited the Fullin Woolens booth and grabbed some Firestar. I’ve used Firestar in my batts and I really like how it gives some sparkle to the yarn.

Finally I picked up some buttons from A & B Creations. I was impressed with the look of a horn button I’d used in a recent project so decided to buy some more buttons for future projects. A couple are horn and the rest exotic woods. One of the buttons is African Blackwood, two are deer horn, two Yew and I didn’t make note of the final three buttons.

After being inspired by the show I spent hours yesterday and finally finished some yarn that I spun from some Wellington Mystery fibre I’d bought at the 2014 Woodstock festival. I tried spinning finer so that I’d get more yardage but the yarn still comes out to a fingering/double knitting weight but I’m okay with that as it’s less work to knit. I think I got more yardage but I’ll have to wait and see when I wind the yarn into a yarn cake. 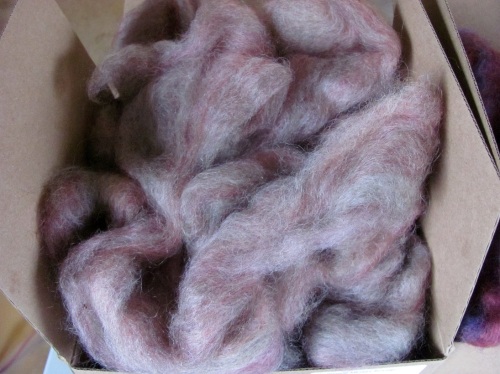 I thought the fibre looked like a dusty rose but after working with it I’m not sure whether or not to call it a rose-brown or a copper colour. The fibre was interesting with pink, yellow, grey and blue in it. The mill sells it’s roving in boxes. Any roving that is left over from being weighed and boxed is thrown in a bin. This roving is then combined and made into new roving and since by this time it’s all a jumble as to how much of each different fibre is in the roving they call it Mystery roving and sell it at a bit of a discounted price. Seeing as how it’s hard for me to pass up a deal that’s what I bought.

The Knitter’s Frolic show itself was spectacular but I forgot my camera so sorry no pictures. I can safely say that if you save your entire year’s craft budget you could spend it all at this one show and come away very happy. The booths were a feast of colour and beauty, lovely yarn everywhere and all the gadgets you’d every need.