I had a recent request by my grandson to knit a snake and I blithely agreed thinking how hard can it be? As it turns out it’s pretty easy especially if you’re used to knitting with double pointed needles, however it is time consuming. You look at the picture of the snake and you think oh I’ll get that done in no time but it just keeps going on and on and on.

Then of course you stuff the snake as you go and pretty soon you’re trying to manipulate a four foot snake and rotate it with your feet as you go round and round meanwhile all the time doing colour changes for the different bands of colour. 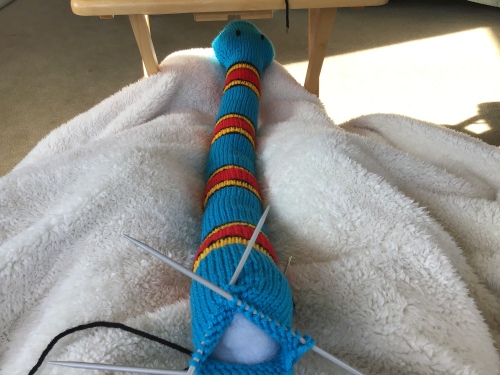 The snake does look awesome, only issue – I said I’d do one for his sister. I might try a different stuffing technique for that one.

After an intensive week of snake knitting I decided to knit my dad a hat as he said he lost his. Translate “lost” into “misplaced” and it became clear that he didn’t need a new hat but since I’d cast on the hat I decided to knit it anyway. I knit the hat in Lion Brand Hand-dyed Wool Ease and since it was a worsted weight yarn I was pleased to finish it off in two days. The only issue was the retirement home he’s staying at has restricted all visitor access while the Coronavirus is going around so I guess the hat will become a fall hat God willing. 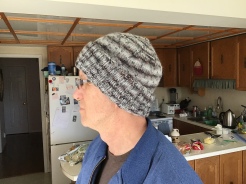 My husband is modelling the hat. This yarn has a tendency to pool and I’m wondering if that’s why it was such a good deal at Michaels.

After I’d done the hat I felt the need to use up one of the Caron Latte cakes I have sitting around the house. This doesn’t sound like an issue but having listened to a recent blog cast by a fellow crafter, I became aware that Michaels had deeply discounted some discontinued colours of the latte cakes. The regular price of a latte cake is $11.99 a cake. The clearance price dropped the price to $3.99 a cake, I may have bought too many.

Is this all the latte cakes I have? Well no, I bought a lot at the beginning of the fall season because last spring they reduced the latte cakes and I only caught the tail end of that sale. I had bought a couple of cakes and knit them up and discovered how much I loved the drape and feel of the yarn. I figured I’d never see the latte cakes again so I did buy a few when they re-released the yarn. 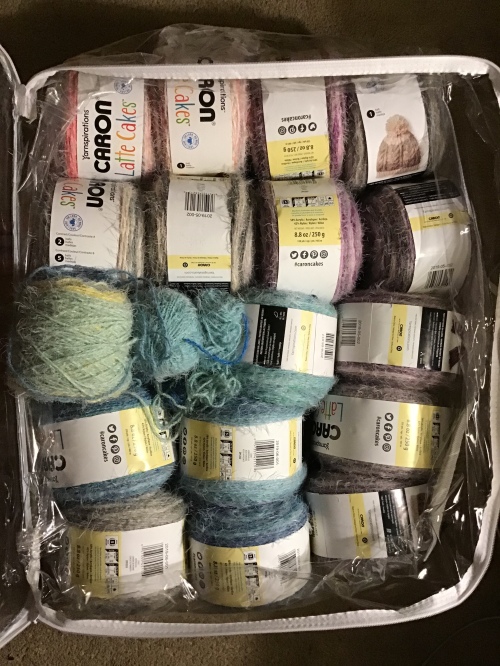 So lots and lots of latte cakes just waiting to be used. What to make, hmm well maybe a poncho. I decided to make the poncho for one of my granddaughters out of the only skein of Pink Melon I had. It was another quick project taking me only two days to finish. The really annoying thing was that towards the end I figured on running out of yarn so I ended up buying another cake. I didn’t need the extra cake as I ended up with 1 yard of leftover yarn (I kid you not). I had braved the corona infested hoards for nothing and I’m not going back out to return the ball of yarn. 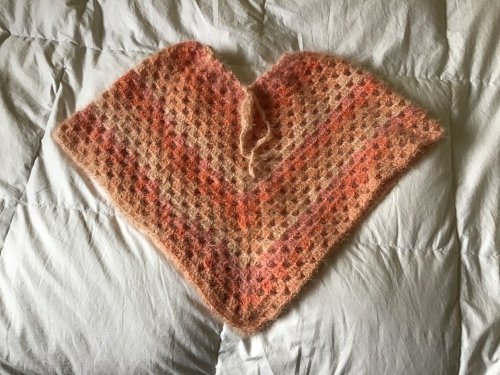 I see more ponchos, shawls, afghans in the future to be made.