Again it’s been a while since I’ve posted, so easy to procrastinate and put off writing the blog. Anyhow, my daughter who owns a food truck decided to enter a few butter tart festivals in February to keep herself occupied during her slack time and she asked if I wanted to do a few tie dyes and sit at her booth.

I’ve never tried to sell my tie dyes to the public before so I thought it’d be interesting to try. I did read a forum post about selling to the public and realized from the post that I didn’t have the proper setup. I just had a spot at the table beside the butter tarts. It’s a good thing I didn’t have great expectations because over the two shows I only sold three shirts. People were there to buy butter tarts not summer t-shirts. As one lady put it, “You should try selling these at Campfest.” As I was dyeing shirts and trying to fill in spots for inventory it also made me realize what a big commitment it’d be to run an actual booth at a proper craft show. I need to have several patterns in various sizes, dozens upon dozens of shirts. Then to make back the money for my table I’d have to sell a dozen shirts before I’d even break even. I can see why people sell online.

Here are a few of the shirts I did, not sure why some of the other photos didn’t turn out. 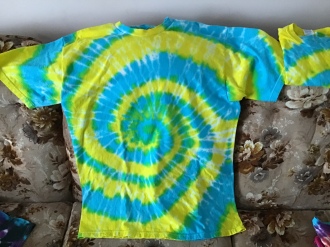 I’ve also been busy knitting and crocheting some winter gear and afghans. A couple of months ago I discovered that the local Dollar stores were carrying Lion Brand’s Homespun Thick and Quick yarn for $4 a ball. This yarn normally goes for $12.99 at Michaels craft stores. I guess they’d gotten the yarn because it was the discontinued colours. I think what happened was each store was shipped three boxes of yarn and each store had random colours. It became a game to find all the different stores in my area and see what colours they carried. The stores only put out a box at a time so I was continually returning to see if anything new was on the shelves. I ended up spending a lot of money over $300 but calculated the same amount of yarn would have cost me over $800 full price.

The first afghan I made was supposed to be a shoulder shrug but I didn’t bother sewing up the side seams deeming the piece looked better as a lapghan. The second afghan I decided to crochet in the typical wave pattern. It was here that I fell in love with the yarn. There was so much more texture with crocheting than knitting and I loved the chunkiness of it all so I went out and bought as many different colours that I could. I had to buy the neutral white and beige to fill in. 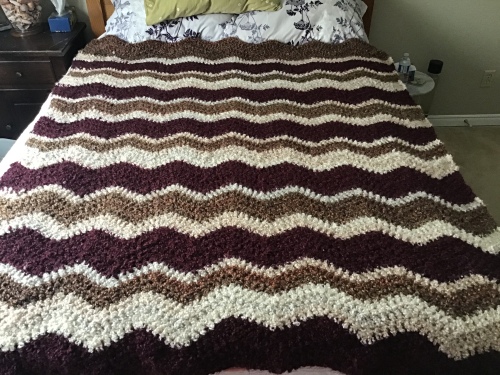 Lion Brand Thick and Quick colours Wildberries, Periwinkle and Dove.
Pattern same as above but four rows of each colour repeated.

Lastly here are a few photos of a few winter knits.