I guess it’s been a while since I last posted. I have a ton of pictures taken but looking at my last post I realized that I haven’t gotten around to posting anything new in a while.

I thought I’d toss up some pictures of some yarn that I scored from Value Village. I call yarn that’s probably about 30 years old heritage yarn. Value Village will take yarn it gets from a donation and break it up into little bags of about four skeins or balls. Sometimes you’ll find bags with the same colour in them but more often they’ll break up the same colour and put it into multiple bags with different colours tossed in. I figure they do this on purpose so the buyer has to end up buying five different lots just to get similar skeins of the same colour. This is how I ended up buying a lot of wool. Knowing myself I’d probably have ended up buying it all anyhow since it was good wool. 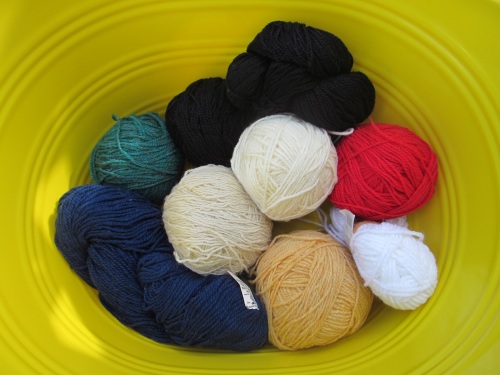 This bucket has the six skeins of the green I was really going after but I also scored three nice skeins of black as well.

I know the green yarn was old because the label on it said Condon’s Yarns and that mill is no longer in business in fact it burned down a few years ago after having shut down. The black yarn also had Condon’s labels on them. The other label on some of the skeins was Briggs and Little, which I was happy to see. 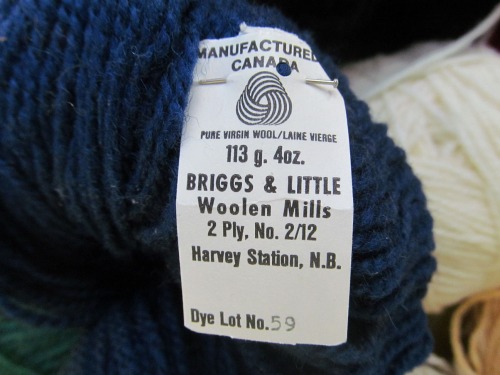 There were also various other skeins that had been wound into balls and they were without labels. I guess I’m going to have to knit swatches out of them and see what weight of yarn they are. What was really neat and I didn’t notice this until I got home was that one of the wound balls was an exact match for five skeins of yarn that my mother-in-law had given me. I was very glad to see it as I didn’t think there was enough yarn for a sweater. She also bought this yarn about 30 years back but didn’t knit with it or she tried but she found out that she’s allergic to wool and it made her hands itch. The green is from Briggs and Little and they still make it today as I just received some sample cards in the mail yesterday and that colour is still offered. 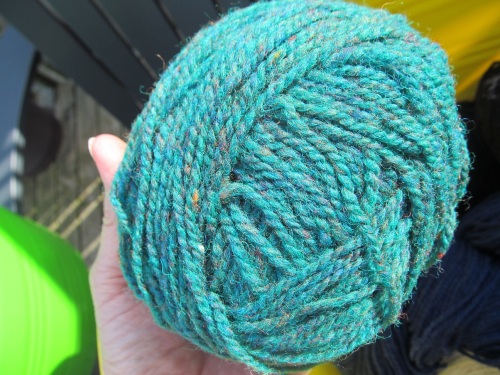 The green heather compared to my mother-in-law’s skein.

I got 15 balls of yarn for $22 and so I’m well pleased with the deal. It’s all about being in the right place at the right time. The green yarn from Condon’s did smell but it’s funny because the black from Condon’s didn’t. I decided to wash all the green skeins in some Unicorn Power Scour and there was a ton of dye washed out so I’m thinking the smell was from processing and not from being in a plastic container all those years. The yarn washed up beautifully and is gorgeous. The only thing left to do is to try and decide what I’m going to knit out of it. The idea is either a yoked sweater or maybe a hap shawl I’m not certain which to go with. I have an upcoming KAL in January in one of my Ravelry groups so I think I’ll wait until then to decide what to do. There is plenty of Christmas stuff happening at the moment to keep me busy.

This entry was posted in Knitting and tagged Briggs and Little, Condon's Yarns. Bookmark the permalink.